Spoon Radio, a personal audio platform backed by SoftBank Ventures Asia and KB Investment, is targeting to breakeven this year with a forecast revenue of US$100 million.

Spoon Radio Inc CEO Neil Choi said the target is not far-fetched considering that the startup reached US$41 million in revenues last year, double the figure posted in 2018.

Choi started the company in 2013 with fellow co-founders Choi Hyuk jun and Hee-jae Lee, and today Spoon Radio operates much like an internet radio station.

Achieving the US$200-million revenue this year will be a milestone for the Seoul-based real-time personal audio broadcasting platform.

“As the first mover in the audio live platform space, Spoon Radio has demonstrated marketability and potential in many countries and will focus on improving profitability this year,” said Choi.

The platform first launched in Korea and then made its way to Japan. It went on with its global expansion foray by getting into 10 countries and then launched in the US last year.

The platform features a mixture of music and DJs broadcasting live. Additionally, it has features that allow listeners to become broadcasters themselves. The platform earns through the sale of virtual items. The broadcasters also get their share of the sales.

“Spoon Radio provides a space where everyone can connect and share their thoughts about everyday, real-life issues with just their voice,” the company said on its website. 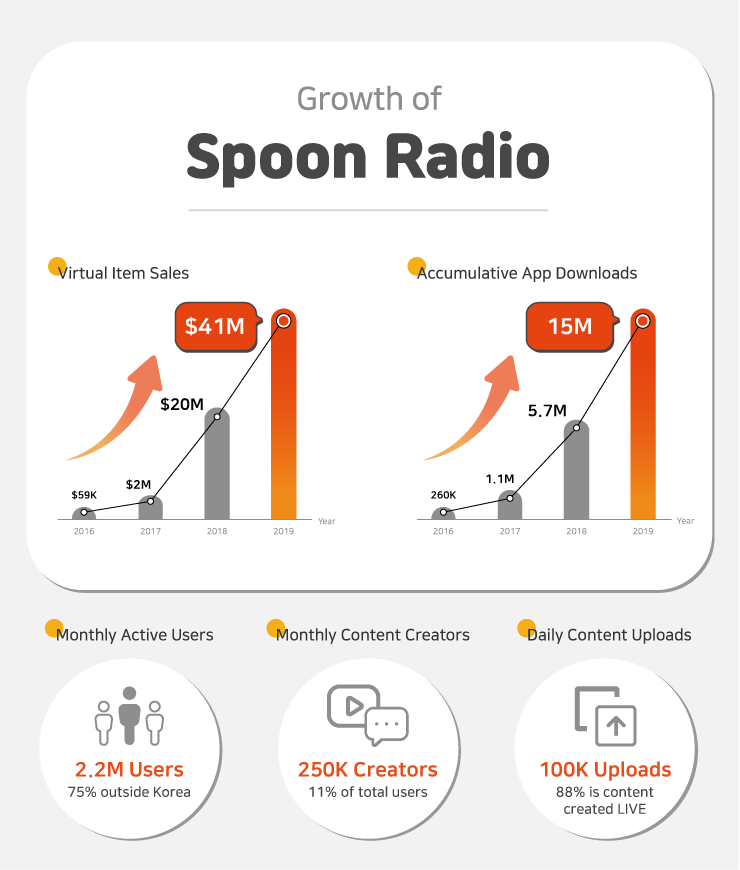 Currently, the company’s revenue from overseas markets exceeds revenue within Korea. Its cumulative downloads also surpassed 15 million, with about 100,000 audio streams generate on the platform daily.

In 2018, Goodwater Capital, one of the early backers of Musical.ly, which was acquired by ByteDance, teamed up with SoftBank Ventures Asia and KB Investment to invest US$17 million in Spoon Radio.

The firm also raised funding from Access Ventures and Altos Ventures in 2017.

Research firm Market Watch said the internet radio market is expected to grow at approximately US$4 billion by 2023, at 18 percent of CAGR between 2017 and 2023.